For Muniya Khanna, strong emotional reactions and increased social discomfort are predictable responses as youngsters emerge from more than a year of isolation and students re-adjust to altered routines caused by the pandemic. Khanna is a clinical psychologist in Pennsylvania who specializes in treatment of childhood anxiety. She explained that anxiety is part of the body’s fight-or-flight response to uncertainty. While in-person activities may be billed as a “return to normal,” Khanna said it also brings with it the uncertainties of social interactions with which children have been out of practice. As a result, she said, children’s bodies are “kind of primed to feel really more uncomfortable than ever before in going towards those things.”

To ease the adjustment, Khanna and other experts recommended that parents and teachers listen and observe, help children shift their focus, reestablish routines and communicate with each other as the students re-adjust. “This won’t be an ideal transition. But I do think if we kind of stick to those basics, that we’re going to get there,” said Khanna.

What Parents Can Do

Child psychiatrist Michael Enenbach recommends learning the signs of anxiety and simply paying attention as students re-adjust to school. “Checking in every day, like, ‘How’s your anxiety? How’s your depression?’ can be a little bit much for a kid,” said Enenbach, who is clinical director and associate medical director at the Child Mind Institute. “So it’s about observing their behaviors, observing what they’re struggling with and then sort of having an open-ended conversation with them.”

While problems such as bullying or severe depression may require help from school leaders or a psychologist, Khanna said anxiety usually comes from the “what ifs.” The fastest way to get out of that spiral is to help children ask different questions and plan action. One young girl Khanna worked with this summer was worried about getting teased on the bus. Rather than identifying all the ways to solve the potential problem, Khanna helped the girl plan what she wanted to do more of on the bus, including saying “hi” to all the classmates she knows. “Planning that action actually creates a lot of relief,” Khanna said. “It’s like you’ve just given your body the signal that you’re OK because you’ve just planned to do something.”

Shifting the focus doesn’t mean pretending everything is OK, and it doesn’t mean children won’t experience discomfort as they re-adjust. But Dr. Khanna said it can guide children to strategies for making themselves feel better in hard moments. “Whenever we work with kids with any kind of anxiety, we’re trying to help them identify the thing that they’ve been avoiding and then try to move them slowly towards getting more and more comfortable doing those things.” 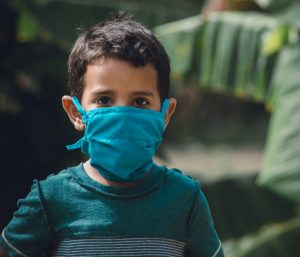 What Teachers Can Do

“I’m very concerned that our schools are just going to act like everything is just normal and fine because we’re all back together,” Lucianovic said. Rather than waiting to respond to warning signs, she wants to see schools proactively help students process what’s happened in their lives since March 2020. “I’m talking about really open forums of, like, ‘Hey, we’ve been through this and we should sit with the fact that it sucks and validate those feelings,’ so that kids just don’t feel like they’re supposed to pretend to be normal.”

Affirming children’s emotions is one the best things adults can do as kids cope with stressful changes, according to Khanna. “Our job is to demonstrate confidence and calm and that they’re going to be OK,” she said. Another role that teachers in particular can play is creating predictability. That can include taking tours of the school and classroom, setting behavioral expectations, breaking down tasks into individual steps and providing an agenda. “Every time we do something in a consistent way … our body learns and it resets and it will get better.”

With amplified stress this year, kids might need more practice with routines, and teachers might need more patience. Rosenberg, of the ACA, said camp staff this summer found that kids needed more transition time between activities. They also found that, even as campers expressed more discomfort with interacting with new people, they really craved chances to just talk. Making time right away for students to build relationships is a lesson teachers can take from summer camps, Rosenberg said. And getting outside and being active is a great way to do that. “I think that kinetic and experiential learning is exactly what kids need after they’ve been isolated and sheltered for 18 months.”

To manage the tension between social anxiety and the need to connect, Dr. Khanna recommended starting with small steps and building up as students re-adjust. For example, instead of jumping into round-robin reading, a teacher can have pairs read aloud to each other, then to a group of five, then to the whole class.

When tolerable anxiety morphs into a breakdown or acting out, removing the student from the classroom or stressor isn’t the best idea, Khanna said. It’s a short-term solution, because the relief from the fight-or-flight reaction “actually came in the form of leaving the problem and now you’re probably going to have it come up again.” Instead, she suggested finding a small task that allows the student to regain a sense of control — that planned action idea again. Ideally, the task will include an avenue for rejoining the group when the student is ready. For instance, a teacher might ask if the student wants to organize the classroom bookshelf for a few minutes and then pick one book that the class can read together.

How Parents and Teachers Can Work Together

Anxiety about the return to school buildings isn’t exclusive to children or teens. Parents and teachers have dealt with a lot of change during the pandemic, and surging coronavirus cases from the Delta variant have thrown additional stressors into the mix as students re-adjust to school. To ensure that they can support young people, adults first need to take care of themselves, Enenbach said.

Additionally, parents and teachers need to support each other. “Parent-teacher conferences generally revolve around how the kid is doing,” Enenbach said. “But I think it’s nice for the teacher to check in with the parents and the parent to check in with the teacher just to see how they’re doing. It’s just sort of an empathic thing to do that really solidifies that relationship.” Enenbach also said it’s more important than ever for parents and teachers to communicate about what they’re observing in the classroom and at home. He pointed out that back-to-school time always brings a mix of excitement and anxiety. While those feelings are understandably heightened now, he said, “We’ll get through this and we’ll get through it together.”

Enenbach and Khanna both warned against imposing artificial timelines, though. In particular, the readjustment period may be hardest and longest for children who struggled with anxiety before the pandemic, those who entered remote learning just before hitting a developmental milestone and children who experienced trauma during this period. As Rosenberg said, “The impact of the pandemic is not going to melt away with one summer camp.” The same goes for school building reopenings.

Our experience with Boston Tutoring Services was excellent. Our tutor was extremely knowledgeable with the ability to teach in a supportive way that gave our daughter the tools and the confidence to do well on the SSAT. The email communication was great and made the process easy and organized. We had a wonderful experience with Maureen. Thanks for everything!