Amy Poehler, well known for her roles in Saturday Night Live and Parks and Recreation, has taken her platform and used it to help fight global poverty. Poehler and a colleague of hers, producer Meredith Walker, started Amy Poehler’s Smart Girls in 2007, which originated with a YouTube video series in 2008 to help inspire girls and teens to express themselves. Since then, the web series has grown into a dedicated website that is intended to be a place for inclusion and positivity of all types, featuring writing on a variety of issues from women’s rights to the LGBTQ movement and poverty.

Amy Poehler started ‘Smart Girls’ for the next generation. Characters like Leslie Knope are overachievers who had big dreams from a young age. Poehler knew there were real life Leslie Knopes out there, but not enough venues for them to connect. She and a partner started Amy Poehler’s Smart Girls for those girls.

“Many years ago, over 10 years ago, it’s like an online community that we started, Meredith Walker and I started many years ago,” Poehler said. “It’s just kind of a place for people to meet like-minded people. We try to promote the stories of interesting young people who are changing the world by being themselves.” Poehler would interview young girls and give them a place to showcase their talents. Just being on Poehler’s social media or YouTube channel would be a huge platform.

“It started as an online show,” Poehler said. “We kind of wanted to create something that we would have liked to have joined and watched when we were younger. I think there’s something really special about taking the temperature of young people, listening to what they care about, amplifying their voices. It’s an attempt to do all that.” 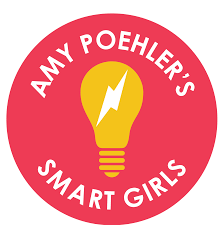 Still, Poehler likes hearing about anything that may interest young girls. “I used to just interview young people and ask them stuff like what’s it like to be a sister?” Poehler said. “Why are you interested in bugs? Any time anybody talks about what they’re interested in, they’re interesting people. It’s building up what they’re passionate about.”

Recently, the organization worked with the nonprofit Well Aware in an effort to bring awareness to the importance of clean water in Africa. Well Aware, based in Austin, Texas, works to bring clean and accessible water to East Africa by funding and building life-saving water systems. Clean water is instrumental to improving water-scarce communities’ quality of life not only by preventing waterborne diseases and providing safe drinking water, but it also affords people the ability to shift their time and energy elsewhere. As a result, providing clean and accessible water drives economic development and an overall ripple effect in positive changes.

At Well Aware’s Winter Waterland Virtual Gala on December 3, Poehler and Walker were awarded the 2020 Global Impact Award in recognition for their support in improving the lives of girls around the world. At the gala, Walker said, “We know from our work with UN Women that whenever girls and women are supported, and can take leadership positions in their communities, everyone does better.”

Smart Girls’ work to support women around the globe is vital, as pointed out by Well Aware founder Sarah Evans. Noting the importance of clean water in supporting women, she explained, “There can be no prosperity for women without access to clean water. Most often, it’s the role of women and girls to collect and treat water in these developing regions of the world, meaning their lives are tied to manual labor with little time for education, much less, laughter. Once plentiful and sustainable clean water is in their communities, the trajectory of their lives are changed forever.”

Amy Poehler’s Smart Girls not only provides inspiring media for girls to consume, but they are also really making a difference. Please check them out here!

We wanted to let you know how much our son benefited from working with Sara Kuzmin. We found her skill set to be a perfect match for our underachieving eighth-grade son. Sara kept him focused, helped him set goals, and keep up with his classmates. Thanks Boston Tutoring Services!