Student stress is ever on the rise, and schools across the country say they’re seeing an uptick in disruptive behaviors as students are returning to classrooms. Some are obvious and visible, like students trashing bathrooms, fighting over social media posts, or running out of classrooms. Teachers report that others, however, are quieter calls for help, like students putting their heads down and refusing to talk.

Alyssa Rodriguez expected a rocky readjustment this school year. The Chicago social worker figured she’d see more students who were dealing with stress, felt anxious and frustrated with their schoolwork, or disoriented by unfamiliar routines.

A month into school, she says she underestimated the challenge ahead. Student behavior referrals are up, as middle schoolers hurt each others’ feelings with comments they’d usually only be bold enough to say online. She and other social workers have seen more verbal and physical fights, and worried parents are calling with concerns about their child’s shorter-than-usual temper.

“This is a prolonged adjustment period,” said Dr. Tali Raviv, the associate director of the Center for Childhood Resilience at Lurie Children’s Hospital in Chicago. As children return to school, “There’s much more interaction, there’s much less downtime to recharge, there’s much less flexibility.”

The behavior issues are a reflection of the stress the pandemic placed on children, experts say, upending their education, schedules, and social lives. For students dealing with grief, mental health issues, or the layered effects of poverty and racism, big transitions can be even more challenging.

Anxiety and chronic stress also trigger a child’s “survival brain,” as Raviv put it. While some students retreat, others feel like they’re on high alert — turning a nudge in the hallway into cause for an outburst, for example. “You can get these really big reactions over really small things,” she said.

Coupled with staff exhaustion, the behavior challenges are making school environments more tense than educators and students had anticipated — and underscoring how much support students need right now. 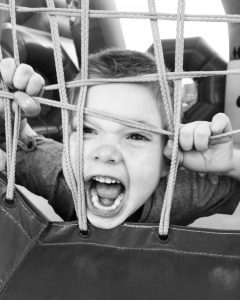 Alex Magaña saw behavioral challenges crop up last year at the two Denver middle schools he oversees as executive principal, Grant Beacon and Kepner Beacon, when students were largely confined to one classroom. Students would occasionally rip off their masks and storm away, leaving staff members to chase them around the building, trying to prevent more disruption.

When classes resumed last month, the acting out intensified, Magaña said. There was a fight on the first day of school instigated by a social media slight, plus more defiance and challenging of authority.

“It’s hard when there are bumps,” said Kelsy Schmidt, the schools’ dean of instruction. “We want everything to be nice and smooth, and have high academic growth for students. But there are bumps now.”

Across the district, fights are up 21% this fall from the pre-pandemic fall of 2019, according to statistics shared publicly by Denver Public Schools officials. Mike Eaton, the chief of safety for the 90,000-student district, said he doesn’t know for sure what is driving the increase but suspects staff shortages are playing a role.

“Everybody is off in their own little la la land. It’s like we just go there, get to class, get out of the class, go home,” said Johnson, who’s also a member of Houston’s student-led congress. During group projects in class, teachers have to urge students to talk with one another. “It’s like we’ve forgotten how to socialize since we’ve been out of school for so long.”

Among teachers of younger students, it’s not uncommon to hear that students seem two grade levels behind socially. Educators have noticed that elementary schoolers who spent much of the last two years learning online are — to no one’s surprise — struggling to share and walk slowly in the hallway.

One challenge is that teachers often can’t point back to established rules and expectations, because those looked very different last year.

In Los Angeles, Cabrillo Avenue Elementary principal Nathan Mac Ainsh is hearing from parents asking why their children are getting hit on the playground. The reality is they’re just playing “a little too rough,” and not used to the rules on the playground after last year’s recess consisted of socially distanced walks.

Some students have responded differently. In Chicago, Rodriguez has watched students who are fearful of the virus refuse to get out of the car or hover at the entrance of school, afraid to go inside.

Other schools that expected to see more emotional outbursts and disruptive behavior haven’t seen them. In some places, staff have noticed behavior improvement, as students regain the structure and schedules they didn’t have last school year — though they acknowledge it may be a “honeymoon phase.”

“Kids are excited to be in this social environment. They missed each other,” said Shirley Brown, the high school principal at Detroit Edison Public School Academy. She’s noticed behavior is better than usual, perhaps because students don’t want to risk being suspended. “The students really want to be in the building, and they’re not quick to jeopardize that.”

Schools are making changes meant to help, often with the help of COVID relief funding. Missoula County schools in Montana, for example, hired a dozen additional staffers to focus on student behavior and mental health. Now they have staff at every elementary and middle school to teach coping strategies to kids who are getting frustrated quickly.

Brown’s school in Detroit adjusted schedules this year so every morning begins with 15 minutes students can spend on deep breathing, discussing something in the news, or venting about personal stress.

“The needs are different than in a typical year because there’s such a high level of grief,” Brown said. “If they don’t have the opportunity to talk it out, they’ll act it out.”

We enjoyed working with Chris Farnsworth of Boston Tutoring Services. He was extremely professional but friendly and flexible and my daughter improved her scores after several sessions with him. His qualifications as a professional teacher were impeccable. BTS worked quickly to find us a tutor under a challenging timeline. – Cohasset