Deciding whether to allow students to listen to music in the classroom is a modern teacher’s dilemma. Every single time students need to write an essay or work on a problem, they say, “Can I put my headphones on? I think better that way!” But is that really true? Does music help or hinder concentration? Let’s take a look at the thoughts of three different high school teachers and their takes on letting students listen to music in the classroom.

Mrs. T, a chemistry teacher from Georgia, has been using music in her classes to increase student motivation and keep students thinking about chemistry outside of class. Her students often chuckle at the song choices, but they can all relate in some way to the music. She started her project by asking students to find music that included chemistry themes in popular lyrics. They were encouraged to choose songs from various sources, and not solely use YouTube to find science songs.

The submissions Mrs. T received represented a wide range of music genres mirroring the diversity of the student body. The lyrics came from oldies, hip-hop, and rock, as well as some educational web-based songs.  Some examples include Michael Orfutt with A Mole is a Unit, Bill Nye with Atoms in my Life, Coldplay with Speed of Sound, Keri Hilson with Energy, and Duncan Sheik with Half Life. More than 80% of the class participated in this optional activity, submitting a total of 66 songs.

Mrs. T says, “Based on student comments they are listening more closely for chemistry content in the song lyrics. When they hear words like ‘pressure’ or ‘heat,’ it jogs their memory to a scientific concept they learned about in class. The incorporation of music into my class has given students a new way to think about chemistry. It’s a way to get students thinking about science and seeing that it’s relevant to life beyond the classroom.” 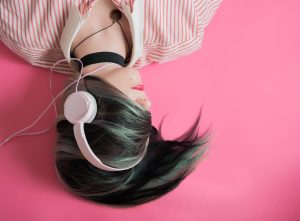 When Mrs. K, a Californian English teacher, asked her students why they always listen to music at school, the vast majority of the answers she received were variations of “music makes me happy.” This gave her the idea to tap into this feeling and use it to spark joy, create community, and make learning more engaging for her students. She uses the following three musical methods frequently in her classroom.

Mrs. K does not have songs playing constantly in her classroom—there are times when silence is more effective, such as with certain writing and reading tasks, and every teacher needs to determine this balance for themselves. It cannot be denied, however, that music exerts a powerful pull on students, a pull that can be harnessed to create a more effective learning environment.

When Ms. B consulted her students, they had a lot to say. Tod, a senior, said, “I wouldn’t be able to concentrate if I were listening to music and trying to read. However, when I write, I feel like music helps me concentrate deeply. I don’t have writer’s block. It’s easy for me to put my words on paper.” Another student, Dina, said, “Maybe not with reading, but when it comes to math, listening to music definitely helps. You could actually be singing along with what you’re listening to and doing well in math.”

Upon reflection, Ms. B’s conclusions were that students see listening to music as a reward, and that they refute the research that says the brain loses focus when multitasking. Instead, they argue that listening to music helps them tune out distractions. Ms. B says, “When my students listen to music when writing essays, they usually start working immediately and almost always hand in a product. But the question remains: would that final product be better if the student was not listening to music?”

Boston Tutoring Services was prompt with providing information about their services. Without applying pressure, they allowed me to speak with multiple tutors to find one that would be the best match for meeting my son’s tutoring objectives. Jim Vlachos was punctual, professional and helped to get my son into a rhythm of taking practice tests and reviewing areas that needed improvement. Bob