Deborah Rosenthal has learned a thing or two about online learning. She starts her virtual kindergarten class on Zoom every morning with a song — today, it’s the Spanish version of “If You’re Happy and You Know It.” Her students clap along. There’s a greeting from the class mascot (a dragon), yoga, meditation and then some practice with letter sounds. Rosenthal teaches Spanish immersion in a public school in San Francisco’s Mission District. Most of the families are low-income, and many are now affected by job losses related to COVID-19. She has taught kindergarten for 15 years, and she loves how “hands-on,” “tactile” and “cozy” it is to work with 5-year-olds.

But this year, she’s spending 10 or 12 hours a day on, basically, her own home production of Mister Rogers’ Neighborhood en Español. “It’s a very two-dimensional experience,” she says. Few people would tell you that online kindergarten was a good idea, or frankly even possible. That was before 2020. The number has fluctuated as cases rise across the country, but throughout this fall pandemic semester, between 40% and 60% of students have been enrolled in districts that offer only remote learning, according to a tracker maintained by the company Burbio.

And even in hybrid districts, some students have been learning remotely, either part or full time. In short, online learning is the reality for a majority of students this fall. We are still starved for data on what all of this says about online learning and how it affects our students and teachers. The earliest standardized test scores coming out show modest learning loss for students in math, but there are worries that the most at-risk students are not being tested at all. Here are five lessons learned about online learning so far:

1. The digital divide is still big and complex.

Eight months after schools first shut down, how many students still can’t sign on? We don’t really know, and that’s a problem, says Nicol Turner Lee, director of the Center for Technology Innovation at the Brookings Institution. “We’ve not done a really great job in aggregating the data as to how many kids are still disconnected,” she adds. “It’s very disappointing as well as concerning.”

The National Education Association recently reported, based on pre-pandemic census data, that one quarter of households with children ages 5 to 17 lacked either high-speed Wi-Fi, a computer or both. For households near the poverty line, the number was closer to half. That figure may have gotten better. Many districts have scrambled to distribute their classroom laptops to families, to buy portable hot spots, and call on private and corporate donations. But there are still gaps. Partly, that’s because there hasn’t been any pandemic federal stimulus aid to public schools since April. State revenue is down, too. For example, Richard Carranza, chancellor of New York City public schools, said last month that 60,000 of the district’s 1.1 million students are still missing devices — about 5.5%.

Lee at Brookings is working on a book about the digital divide, and she says it’s multidimensional. There’s housing: Lose your home and you lose your broadband connection. There are backlogs of items such as Chromebooks. Then there’s infrastructure. “That rural Internet divide is real. I mean it’s a real problem right now in America,” says Caroline Weathers, who teaches in a small town in South Carolina. Her district gave out hot spots, but in some places they didn’t work because there wasn’t cell service from the major carriers. And the digital divide is about more than equipment. Rosenthal’s school in San Francisco, Buena Vista Horace Mann, is a community school, meaning there are wraparound services, including lots of help with technology.

Despite all that, she didn’t make contact with one of her students until 2 1/2 months into the school year. That’s so even though her mother had come to school to pick up a laptop and hot spot. “The little girl was going to a babysitter that was not literate,” Rosenthal says. “And so nobody could help this child get onto a computer.” Another of her students has a single mother who works cleaning hotel rooms; the girl goes along and often joins the class from her mother’s smartphone. Because of barriers such as these, although attendance on her daily Zooms is high, Rosenthal says no more than a fourth of her students have been accessing the written assignments. 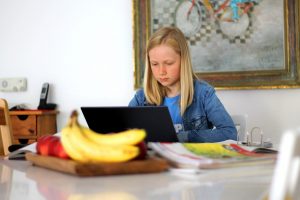 2. Relationships are everything when it comes to keeping kids engaged remotely.

Successful schools are using every adult on the team and every form of communication possible. Theresa Rouse is the superintendent of Joliet Public Schools District 86 in Illinois, where a majority of the students are low-income and either Latino or Black. She says their focus has been on relationships. The district spent the first three weeks of the school year focusing just on social and emotional learning. Educators communicate expectations to parents and teachers by email, calls, texts, over social media, YouTube videos and podcasts. And, Rouse says, any adult at a school — from teachers, to the assistant principal, to a school counselor or social worker — might drop in during video class to show they care: “If they’re seeing a student that looks distressed, they pull them aside into a breakout room, have a conversation.”

In South Carolina, Weathers usually teaches science at St. George Middle School. This year she created a new role for herself, helping families — sometimes with an app that parents can download to track kids’ grades, or with strategies to build kids’ executive function skills so they can succeed in remote learning. She says she’d like to continue the role going forward, making parents more active partners in their kids’ education and taking learning out into the community as well.

“We could take this as a learning moment,” Weathers says. “Now we have the parents’ attention. So maybe now is the time to really reach out and say, ‘This is what we need you to do on your end, and we’ll take care of this on our end.’ And in 10 years, we might see something entirely different in education in the country if we did that.”

3. Digital teaching can be good, even great with the right support for teachers.

But that’s far from the norm. Districts such as Weathers’ and Rouse’s are working with the Digital Learning Collaborative, a nonprofit that is dedicated to best practices in digital learning. Rouse, in Joliet, calls its training “pretty fabulous” and essential to her district’s transition from teaching mainly through paper packets in the spring to full-on remote using Google Classroom this fall. The training “was more intense than [teachers] expected it would be, but that’s OK because teaching online is more intense than people anticipate as well.”

Another organization, Cadence, is also trying to improve digital teaching at scale. It pairs “mentor teachers” with “partner teachers” to deliver a standardized curriculum in reading, math and science. The teaching is a high-intensity blend of video lessons, active classroom instruction with breakout sessions, and software-based practice.

Olyvia Kozicki teaches fifth grade at Augustine Prep, a nondenominational private school in Milwaukee, and is a Cadence partner teacher for English language arts. She says she’s overjoyed at the quality and quantity of work her students are producing. It’s not only more than she expected from online teaching, “it’s more just in general.” Twice a week, she meets with other Cadence teachers from around the country who are also teaching the exact same material on the same timetable. She says that makes it the most practical and actionable professional education she’s ever had. “When we switched to virtual, it was very overwhelming, and it seemed like such a daunting task,” she says. And now “I am so happy with what the kids have been able to do.”

Justin Reich says Kozicki’s experience is unusual for teachers this year. Reich is an expert on educational technology at Massachusetts Institute of Technology and the author of the new book Failure to Disrupt: Why Technology Alone Can’t Transform Education. He says that across the country this fall, “I’ve heard very little evidence of innovation.” Even moves that might seem relatively simple, such as adopting a free, online university-level course for use by high school students, aren’t happening often. Mostly, he adds, districts are trying to re-create classroom teaching routines online with varying levels of success.

“I don’t think it’s getting better because there are major approaches that people have figured out or there’s a model that’s sort of spreading around,” he says. Nor is there a lot of leadership or direction on improving online learning coming from the federal Department of Education or anyone else. Instead, Reich says, what improvement there has been since spring comes mainly from teachers such as Rosenthal — putting in long hours and learning as they go. “It’s just kind of folks sanding down one little rough edge at a time.”

At last count, according to Burbio, 17.5% of districts were offering school in person just a few days a week, with students learning from home the rest of the time. The purpose was to maintain social distancing by reducing class sizes, but the model has created confusion and constant interruptions. Many students are struggling to adjust to classroom routines when they may attend only five days out of three weeks.

Depending on available staffing, teachers, meanwhile, may be yelling through a mask and face shield to be heard by students over Zoom. Jennifer Echols is the director of online and personalized learning for Mesa Public Schools, the largest school district in Arizona. She calls this model “one of the biggest challenges” in remote learning right now. Randi Weingarten, president of the American Federation of Teachers, has called for this “hybrid” model to be phased out. “Hybrid doesn’t work,” Weingarten says flatly. “You can’t livestream and teach in person at the same time.”

5. Some kids are not learning much online. They’ll be playing catch-up in years to come.

There are some anecdotes of children who are thriving with remote learning. “There’s [approximately] 10% of people for whom it works better,” Reich says. And for these students, “this is actually a better version of school.” Maybe they had school anxiety, he explains, or were victims of bullying or discrimination, or have sensory issues and enjoy having more control over their learning environment. But districts including Houston, St. Paul, Minn., and Fairfax County, Va., have reported historically high failure rates this fall.

Echols, in Arizona, says both attendance and engagement in online learning is suffering. “Some kids have had difficulty just paying attention and keeping themselves focused.” In other cases, she adds, “we have families where parents are working, and there’s not the appropriate supervision for young learners, or children that need to be babysitting siblings during the school day.”

What keeps Rosenthal up at night are the kids she just can’t reach. Every year, she says, out of a class of 20 or 21, there are five or six students who show up unprepared for kindergarten. “They’re struggling, but at least they’re with me all day long. And so I can support them six or seven hours a day.” This year, she sees most of her students learning and growing despite all the obstacles. But those five or six who started out behind aren’t getting much of anywhere.

Allison Feigelman is a fantastic tutor!  My daughter learned from Allison the next level of math skills, testing strategies and gained the confidence needed to enter the ISEE on Saturday.  We enjoyed learning with Allison and only wished we had an excuse to purchase additional hours to spend more time with Allison because we really like her too! We will definitely contact you should we need additional tutoring services in the future.