Last fall, teacher Michael Palermo called the crew of Christopher Columbus to the witness stand. Wilfredo Lopez Murcia, a student at Wakefield High School in Virginia, strolled to the front of the classroom, followed by classmate Jhonnatan Moya Miranda.

Wilfredo and Jhonnatan were about to defend themselves in The People vs. Columbus, et al. trial, a social studies role play that encourages critical thinking about European colonization of the Americas. During the interactive lesson, which was developed by a teacher in Portland, Oregon, groups of students make a case for who was responsible for a major crime: the slaughter of millions of indigenous Taínos following Christopher Columbus’s arrival in Hispaniola in 1492. 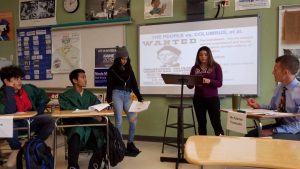 Defending himself and the rest of Columbus’s men, Wilfredo argued that, despite capturing slaves, raping women and setting dogs on infants, they did not hold power in the situation. A classmate serving as a juror probed for more information. Was it also true that Columbus’s men cut off the hands of the Taíno people when they didn’t find gold?

“It’s true but that’s because as soldiers we were trained to follow orders,” Wilfredo said. “There’s no choice.”

A classmate defending Columbus jumped in: “Do Columbus’s men have minds? Do they know right from wrong?”

Wilfredo replied: “The ones who didn’t know right from wrong were Columbus and the king and queen.”

The monarchs in question — Ferdinand and Isabella — would also be called to defend themselves by the end of the period, as would Columbus, Pope Alexander VI and the Catholic Church, the Taínos, and the system of empire. Although the jury would return a verdict, there would be no easy answer to who was most at fault for the atrocities.

“A basic habit of mind I am hoping to nurture is to urge students to ask the deep ‘why?’ questions,” said Bill Bigelow, the Portland educator who created the Columbus trial. “If it hadn’t been Columbus, would a different European explorer have behaved fundamentally different?”

Since the early 1990s, Bigelow has shared the Columbus trial with other teachers through workshops and in the second edition of his book, “Rethinking Columbus.” That book has sold tens of thousands of copies, according to Bigelow, and the lesson plan for the trial has been downloaded from the Zinn Education Project thousands of times and shared with teachers.

Michael Palermo, who is Wilfredo’s teacher at Wakefield High, has done the trial with his classes for more than 20 years. Even though school has moved online because of COVID-19, he still plans to teach the trial. He said the activity aligns well with two recent trends in education: a move toward more hands-on, inquiry-based learning and greater interest in showing more than the victors’ viewpoint of history. The latter trend corresponds to a shift outside of schools, too. About a dozen states and more than 130 U.S. cities have replaced Columbus Day with Indigenous Peoples Day or stopped observing the holiday.

In preparing for and doing the Christopher Columbus trial, students use a number of key academic skills, such as developing an argument, citing evidence and responding to counter-arguments.

According to Bryan Chu, who conducts the trial with his middle school students in Portland, the fact that they’re practicing those skills in a student-led format makes it more engaging. “Once you give them the materials, they run with it,” he said. “They really like to put their ideas to the test and challenge other people and be able to talk back and forth and formulate arguments on the fly. … there’s just not enough opportunities like that in schools.”

Palermo said the format can allow different students to shine. He recalled one student last year who usually came to class fatigued from working two jobs to help his family. But acting the part of King Ferdinand in the trial “really got him fired up,” Palermo said. “I felt bad for (the other groups) because he was really gunning for them.”

As students draw on historical evidence to argue different perspectives in the role play, they also explore their own ideas about power, responsibility and morality. “It’s one of those discussions where … we’re not trying to decide what happened, they’re trying to make some meaning out of it,” said Palermo. “That’s what makes history interesting.”

In late October, after Wilfredo and his classmates made their defense of each group, the jurors deliberated in the hallway. Then they returned their verdict: Columbus, his crew, Queen Isabella and King Ferdinand were all guilty in the murder of millions of indigenous Taínos. Students from other groups cheered and threw up their arms in victory.

But as the hurrahs subsided, Palermo pointed out that it’s a complicated decision. In each of the three classes he taught that week, the jurors returned a different verdict. In class discussions or essays following the trial, both Palermo and Chu ask students to formulate their own verdicts. Chu also presents data from verdicts over multiple years of the activity to encourage students to analyze patterns.

Chu said that the same reasons students love the Christopher Columbus trial can make it scary for teachers — it’s unscripted. “It can go in a million different places, right? And you gotta be willing to just let it go there and deal with things as they come up,” he said. “If you’re waiting for yourself to be 100 percent prepared, you’ll never do it.”

Some teachers also may worry whether questioning the dominant Columbus story is too political. But Chu said that framing Columbus only as a hero comes from a specific viewpoint, too, and it leaves out indigenous experiences. “At the end of the day, (students) do have to come to their own conclusions of what they do with the information or not. My job is to make sure, when it comes time, they have a million different starting points.”

For Bigelow, “To teach about history is to teach about injustice,” and the Christopher Columbus trial does not present simple conclusions about that. “What has been most gratifying is hearing from teachers about how the activity has prompted students to think more deeply about the roots of violence and injustice,” he said.