In the wake of COVID-19 and remote learning, some families are considering having their children repeat grades. This was true for Lauren Phillips, 37, of Los Angeles. After months of schooling through a screen, her 6-year-old daughter, Lola, would finally get the real kindergarten experience.

As it turned out, in-person kindergarten wasn’t much different from remote learning. Lola sat in a room with her classmates while her teacher, who was home for medical reasons, taught them online. A substitute teacher made sure kids had the chance to use the bathroom and get water and whatever else they might need to do.

“It was just so frustrating to find out that the teacher, who we love, was basically going to be remote,” said Phillips. “If we knew that, we would have kept our daughter home.”

Dissatisfaction with remote learning has played out with kindergarten parents across the country, and not all of them have stuck it out. The last year has seemed like such a waste that some want their children to have another chance to get it right and start kindergarten over, when remote learning ends and in-person classes resume this fall. Their kids could be joining others who skipped out on virtual kindergarten altogether this past year.

Kindergarten enrollment across the country took a massive hit during the pandemic. A recent NPR poll of 60 school districts in 20 states showed an average enrollment drop of 16 percent. The Los Angeles Unified School District, where Lola was enrolled, reported a 14 percent drop, a loss of nearly 6,000 students. The declines have early childhood experts wondering what schools are going to do when all of the missing students return.

“It’s the pig in the python,” said Steven Barnett, co-director of the National Institute for Early Education Research. “Say 25 percent of the kids who should have gone to school didn’t and let’s say they repeat. Now we’ve got 25 percent more kids at one grade level all the way through their schooling. They’re going to have a larger class and get less personal attention.”

Educators are bracing for the possibility this fall that many families may want to “redshirt” their children, holding kindergarteners back for a year, a practice usually associated with upper-middle-class families who hope their kids will gain an academic edge. In Virginia, where enrollment fell by 13 percent, researchers found equal declines among families of different socio-economic status. When measured by race, however, the largest declines were among white families. 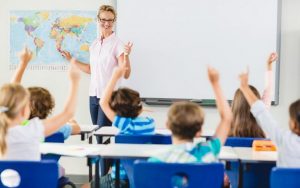 But educators are trying to tamp down any panic parents might feel over a lost year for their children. Remote learning may have gone badly for many families, they say, but don’t assume that kids need to be held back.

“I’m not one of those people who thinks, ‘Oh, this is a lost generation; these kids have lost this year, and therefore nothing will be normal,’” said Anna Shapiro, an early childhood researcher at the University of Virginia.

At Creekside Elementary in Durham, North Carolina, kindergarten enrollment is down by 35 students. Principal Victoria Creamer said that it would be OK if she ends up with a bigger kindergarten class this fall, as long as kids belong there. She’ll hire more teachers and create an extra class or two. But, she warned, “the pandemic alone is not reason enough to retain a child.”

Creamer stressed that parents have to trust schools. “I’m collaborative with parents,” she said. “They’re the experts on their children, and I’m the educational expert. I’ll want to look at academic data and the age of the child. I feel like if I can base my decision on data and a really clear rationale, I find that most parents understand.”

Keeping kids back unnecessarily takes resources from students who really need them, Creamer said. She thinks any child who returns to school in the fall at a first-grade level should be enrolled in first grade, even if that child skipped kindergarten. Barnett said kids who are behind would be better off getting extra support than repeating a grade. Schools that invest in one-on-one tutoring in the early grades could bring students up to grade level in a matter of weeks, he says.

“A lot of the gains from doing intervention happen in the first six weeks,” Barnett said. The key is to diagnose students individually and find out where tutors should focus their efforts. A child might be up to grade in math, for instance, but behind in reading. For some kids, it may take a bit longer than six weeks. “We don’t need to catch students up all at once,” he added.

Some basic information would be useful to schools. Shapiro, the researcher, suggested that parents could be surveyed during enrollment with questions like, “What did your child do for schooling or day care last year?” and “How do you feel about the experience of remote learning?” The answers could help school districts figure out where to place kids. Using a survey could also keep the focus on individual developmental needs rather than a child’s age. The number of students in kindergarten may be greater than usual, but for educators, the practice is the same: individualize instruction.

“This might be a moment where all kids deserve to have an individualized education plan,” said Jenny Hontz, communications chief for the parent advocacy group Speak Up. “Kids experienced the pandemic in different ways, so you have to look at them individually, as they are going to have a range of needs. You can’t have one-size-fits all next year.”

Districts are considering many potential solutions, including summer school, extending the school day or year and hiring more paraprofessionals and early grade teachers. But the arguments against holding kids back face a strong push from parents who don’t want their kids to start the next grade. And some states might let the parents decide. Virginia is granting some students a waiver, allowing 5-year-olds who would typically be enrolled in kindergarten to enroll in pre-K if that’s a better fit.

In California, a bill working its way through the Legislature would require districts to provide a hearing on a parent’s request to hold back their kid. (Similar bills are in the works in Florida, Kentucky and New Jersey, among other states.)

But Carla Suarez-Capdet, 41, worries that the California bill won’t put enough power in parents’ hands. Her son, Jordi, who is autistic, had a tough time in his virtual kindergarten class at Toluca Lake Elementary in North Hollywood. At times, he would become so frustrated that he’d chuck his iPad across the room, pull at his hair, kick and flail, Suarez-Capdet said. A year of remote learning means Jordi hasn’t mastered kindergarten fundamentals, like letter and number recognition, to say nothing of losing the chance to play, share and make friends.

“We didn’t get the romantic kindergarten experience, skipping our way to school with a backpack and lunch pail,” she said. “None of that happened. It was just pure hell.” Suarez-Capdet, an advocate for children with disabilities, seriously considered a do-over, and it was only on the advice of a behavioral therapist and a psychologist that she decided to send Jordi to first grade next school year instead of putting him with kids who are two years his junior.

While loosening the rules around age requirements for the early grades would benefit some families, it may systematically disadvantage others, said Anna Markowitz, assistant professor of education at UCLA.

“Some parents are going to be able to do whatever it takes to get the petition for the waiver and get their kid where they need to go,” she said. “But some parents may not have the time, knowledge or language skills to do that.”

Schools will have to protect against inequalities resulting from the pandemic, which, according to data, has led to some kids doing better than ever while others flail, said Jenna Conway, Virginia’s chief school readiness officer. Some families found that their bank accounts grew during the pandemic and they were able to place their children in learning pods, or enroll them in private preschool or day care. Other families are hanging on by a financial shoestring and their kids aren’t getting any schooling at all.

“The idea is not to assess for the reason of screening kids out, or saying you can’t come to kindergarten or first grade, but to really understand who is facing the most challenges,” Conway said.

And that will take time. The plan is to evaluate early grade students each year while providing them with intense social-emotional development, literacy and math. Conway’s own kindergartner has done a year of virtual schooling and is ready for first grade, she said. But, Conway added, “I wouldn’t want how she does in the first two weeks of school to be the test for that.”

In the end, parents’ confidence may ride on how they view their children’s resilience. For Phillips, the Los Angeles parent, moving to another school district has made all the difference. At her new school in Santa Monica, Lola learns to read and do math from a teacher in the classroom and gets plenty of playground time with her friends.

This has given Phillips a rosier outlook. “I’d like Lola to move on to first grade with her friends next year,” she said. “There will be a lot of ages and abilities, and I’m sure it will all work out.”

Kasandra Miller, 34, hasn’t let the past year get her down either. There were ups and downs for her 5-year-old son, Ayden, who’s in pre-K at Maloney Magnet in Waterbury, Connecticut, where most of the school year was remote. Sometimes, Ayden cried at the prospect of logging into school. Most days he took it in stride, and can now count and say his ABCs. Recently, after months of ignoring questions from his teacher, he finally spoke to her. Miller counts this as a win.

“He’s a little on the quiet side in school,” she says. “He’ll go to kindergarten next year and I’m sure he’ll open up. I’m not worried.”

This article originally appeared on The Hechinger Report website.

David Hung is an amazing math tutor. We were impressed the moment he came to our house with the exact math book that our son is using at school. He helped our son become more confident and improved his math scores. He is very patient and cares about his clients’ success.