Julie Lythcott-Haims stumbled on something troubling and surprising about the independence of the young adults in her midst. It started about twenty years ago, when she served as a dean at Stanford. There, in the company of some of the best and brightest strivers in the world, she found that many students relied upon parents to handle the run-of-the-mill stuff of life for them. Meanwhile, members of the Millennial generation more broadly were going on record as not knowing how to be adults, not wanting to be adults and finding adulthood scary. “Millennials self-identified as struggling,” Lythcott-Haims told me.

The malaise prompted her to write “Your Turn: How to be an Adult,” a guide for burgeoning grown-ups. The book explores how and why contemporary young people are so jittery and, most important, what they (and the rest of us) can do to make adulthood attractive rather than an inevitable bummer.

“I don’t judge them,” Lythcott-Haims said quickly. If anyone’s to blame, it’s parents and other adults who have reared them with the message that danger lurks behind every corner and that Mom and Dad will do anything to rescue them from failure. Grown-ups have been so quick to scurry around and clear obstacles from their children’s path that many young adults, especially those from middle-class families and above, feel ill-equipped to manage on their own. Children from less privileged homes, it turns out, often grow up better prepared to enter adulthood because they’ve been less cossetted in childhood. 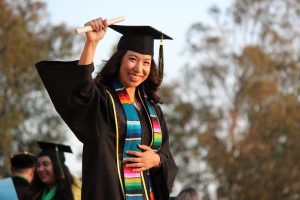 In “Your Turn,” Lythcott-Haims—herself a recovering helicopter parent—speaks directly to young people who may be struggling. But implicit in her guidance for young adults is advice for their parents, teachers and coaches.

Her advice to parents comes in many forms. First, she advises them to resist reproaching their offspring for being fearful or hesitant about entering adulthood. “You can’t blame them for the childhood they had,” she said. Young people need to hear that their parents believe in them. She also encourages parents to look inward, with the help of a therapist, if necessary, to investigate why they’d rather take heroic measures to help their children achieve than allow their kids to figure it out for themselves. “We have decided that our child’s outputs are a reflection of our own worth,” she said; mothers and fathers can’t help but hover and intervene when their kids’ accomplishments feel like a referendum on their standing as parents. Some blunt self-examination might help parents understand not only why they use the royal “we” when discussing their kids’ upcoming tests—“we have a mid-term next week”—but also how this mindset hurts kids. “We mustn’t let our worries, fears and egos impede our children’s progress,” Lythcott-Haims added. There’s a correlation between over-parenting on the one hand, and the collapse of executive function skills, and increase in depression and anxiety among young people, on the other.

Parents also should do all they can to encourage self-reliance. This comes naturally at first: when a toddler begins to walk, most parents stand back and clap, applauding those early independent steps. The trick is to maintain that attitude as children age. Lythcott-Haims identifies three natural domains in which parents can press for greater independence: At home, children and teenagers should be expected to contribute to regular chores; at school, kids must do their own work; and in outside activities, children and teenagers should be learning how to advocate respectfully for themselves with authority figures.

What can parents do who’ve been too enmeshed so far, but who now want to claw back their own lives and spur some independence in their teenagers? Talk to them about the coming change, Lythcott-Haims said. Acknowledge you’ve done too much, and that you recognize it’s time to get out of the way.

“Say it with enthusiasm, not anger,” she added. “It’s a natural part of life.” Then coax them to greater independence by teaching them through these four steps:

Step one: do it for them.
Step two: do it with them.
Step three: watch them do it.
Step four: they can do it alone.

Another tip for parents: “Get a hobby, a friend, a book club,” she said. “Spend some hours every day not focused on your child,” she advised. It will be better for the child and the parent in the long run.

Teachers and coaches have similar roles. Like parents, these adults should help kids become the best versions of themselves. And the way to do that is to focus on building kids’ agency, resilience and accountability.

“It’s not about getting A’s,” Lythcott-Haims said, while lamenting the absence of these developmental ends from report cards. Learning how to read, write and compute is important, but just as vital is figuring out how to function with independence and to carry on when adversity hits. Schools can help teachers and coaches work toward these larger goals by putting a hard stop on parental overinvolvement—like delivering forgotten items during the day and “helping” with homework. Lythcott-Haims suggests that teachers share “do’s and don’ts” slides at back-to-school night, delineating what kinds of participation by parents is acceptable and what’s out of bounds.

We wanted to let you know how much our son benefited from working with Sara Kuzmin. We found her skill set to be a perfect match for our underachieving eighth-grade son. Sara kept him focused, helped him set goals, and keep up with his classmates. Thanks Boston Tutoring Services!