The effect of divorce on children is profound. The nature of divorce means that even with kids involved, adult needs are often prioritized before their children’s, and considering nearly half of all American marriages end in divorce, that’s a lot of children of divorce whose needs are being made secondary. When children’s needs aren’t prioritized in a divorce, it leaves room for misconceptions to run rampant and almost no space at all for truth-telling. These are the biggest misconceptions about divorce with kids that parents going through it need to be aware of.

Myth #1: Toddlers and preschoolers don’t suffer as much trauma as older children of divorce.

Popular wisdom suggests that getting a divorce before a kid can form adequate memories inoculates them from the worst consequences of a divorce. You would think that if they can’t remember the hardship and the wrangling for custody, then they are better off in the long run, but this idea that the impact of divorce can be sidestepped misunderstands child development.

It’s possible that a child experiencing divorce within the first two years of life will be relatively well-adjusted to their reality. But, by as young as 2, children have the ability to build memory and sense that their foundations are shifting. They may not be able to understand the shift on a cognitive level, but they can certainly sense it on an emotional level. And, regardless of a child’s age, divorce increases the likelihood of an emotionally traumatic event happening at some point in life. In reality, the lasting impact of divorce on kids is less about age and more about acrimony.

Myth #2: Children of divorce do better when holidays are split in half.

At first glance, the idea of spending, say, a Christmas Eve with a mom and a Christmas Day with a dad seems like a completely equitable and reasonable way to do things. But the problem is that in splitting holidays down the middle, kids and parents are all given the short end of the candy cane. The problem is that in moving a kid from one home to the other, during notoriously busy times for travel, the chaos of holidays is compounded. A ton of good hours of quality time can be lost when children of divorce are forced to shift from one parent’s home to another during the holidays. And considering that time with kids can be a precious commodity for parents, it’s better to divide the holidays themselves in an equitable way and make the most of the hours provided by staying in one place.

Myth #3: Divorced parents should each have their own rules for the kids.

One of the more insidious effects of divorce on children is having different expectations depending on who is parenting on any given day. Without consistency, a kid is presented with loopholes and instability. Parents can start feeling slighted and conflict can increase. The best way parents can handle divorce with kids is to enter into a state of co-parenting. That means expectations are consistent between households and so are consequences for running afoul of those expectations. So if a kid loses access to their tablet at their mother’s house, the access remains lost for the duration of the punishment, even if they are at their father’s house. When discipline remains consistent, kids can feel like they’re on a better footing. It also means one parent doesn’t get to play the “fun parent” card and comes off looking like a saint in the eyes of their kid. 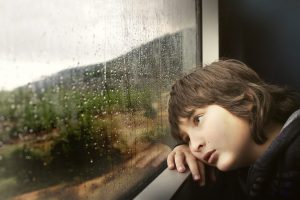 For adults going through a divorce, there is a great deal of emphasis on their own emotional and mental health. It’s only fitting that they would lend the same concern to their children, but children of divorce can show surprising effects in physical health as well. Physical symptoms of the stress of divorce can include weight loss or loss of appetite, stomach problems, loss of sleep, and even a compromised immune system. So while many divorcing parents may considering counseling for their child, it’s also a good idea to consider a trip to the pediatrician as well. After all, the adverse health effects can be felt well into adulthood, with some research suggesting that children of divorce have more colds and cases of flu even as grown-ups.

Myth #5: Parents should try to hide their divorce and/or new relationships from kids.

The problem with the idea of hiding divorce from kids is simple: kids aren’t dumb. The best way to approach a child about an impending divorce is as a united front. Both parents should offer an age-appropriate explanation. The primary point of the discussion should be that despite the separation of the parents, the kid is still deeply loved. It should be stressed that the child is faultless and that they have done nothing wrong to prompt the divorce.

It should go without saying, but this conversation should also be civil and free of subtle barbs and backhanded comments. Again: kids aren’t dumb. The same goes for developing new adult relationships after divorce. Considerations must be made for the age of the children, and obviously you’d want to be serious about someone before introducing them to your kids. But don’t hide the fact that you’re dating if you are, because your child probably knows more than you think–they hear and notice everything.

Myth #6: Babies should not stay overnight without their moms.

The default position for many divorced parents of younger children is for mothers to keep children overnight, with father visitations only occurring during the daytime. The thought is that if a kid is spending nights with a father, maternal bonding could be damaged. However, studies show that kids who have overnights with their divorced fathers as babies have much better outcomes later in life. This may not only be due to bonding. In fact, being a regular part of a child’s nighttime and morning routine helps fathers become better parents. Even better, overnights with dad result in stronger future relationships not just with the father, but with the mother too.

Myth #7: Kids need to know the truth about a “bad” ex-spouse.

Here’s where it would be more prudent to hide information from your kids. If your relationship with your ex-spouse is emotionally rocky, the kids don’t need the dirty details. The fact is that a kid sees their parents as a part of themselves, and they love them both regardless of the separation. When one parent tears down the other, a kid can feel like a part of themselves is being attacked. They may take on the anger and feel guilty for the actions of a parent they love. In the worst-case scenario, tearing down a spouse could drive a kid into a lousy parent’s arms as the kid gets older. Essentially that bad-mouthing can backfire. It’s better to trust that a kid will learn about their parents, driven by their own curiosity, in their own time. Eventually, they will be able to make up their own minds about how they feel about a “bad” parent.

Sarah Bernstein did an excellent job zeroing in on exactly what my son most needed to practice. She helped him improve in areas in which he was already strong while making marked improvements in areas of weakness. She made the sessions enjoyable but kept him focused. His scores were even stronger than we could have hoped for, in large part because of her efforts. We had a last minute need for tutors for our two…