Studies show that the average teenager requires 9 to 9.5 hours of sleep per night, but she typically only gets 7. It’s becoming more and more common for the normal life of the average American high schooler to interfere with sleep. In a recent poll of 2,000 parents, 1 in 6 said their teen experiences frequent sleep problems, here defined as “having trouble falling asleep or staying asleep 3 or more nights per week.” More than half the parents said it’s because their teens won’t get off their electronic devices, and 43 percent blame irregular schedules with homework and activities. Additionally, a significant percentage of parents say their kids worry about school (31 percent), and 23 percent say their teens stay up worrying about their social lives.

It’s likely that the numbers of teens who have trouble sleeping is even higher than the poll of parents suggests, because kids can hide their nighttime electronic use, and parents may not frequently check in on older children. Despite the standard sleep requirements for teenagers, even their own bodies work against them as they get older, since they are naturally inclined to go to bed later and sleep later in the morning during this period of development. The early high school start time doesn’t allow for this, however. So how can parents help? Here are some tips for helping your teen get the rest they need to succeed in school and beyond.

1. Pull back on the crammed schedule. This is antithetical to what many parents of high school students and some students themselves think they should do to get into college. Does your teen really need to star in the school play, run for student council, AND be the starting quarterback for the high school football team, though? Colleges appreciate seeing a focused and developed interest over time, so just choose one.

2. Teach time management. If you don’t have four hours straight to get homework done at night, break it up into chunks. For example, if you have 45 minutes before your next activity, go to the library and get one or two subjects worth of homework out of the way.

3. Pursue policy changes. Most sleep scientists say it would be healthier for older children to start school later in the morning than most U.S. school districts do. The California Legislature passed a bill at one point requiring middle schools and high schools to start no earlier than 8:30 a.m. by 2021, but Gov. Jerry Brown vetoed it. Such a change nationally won’t come easily, but the benefits to our children’s health are worth fighting for. 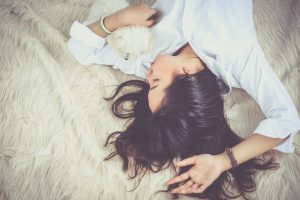 4. Avoid taking long naps. Preventing kids from taking those tempting, long, late afternoon naps can help create an environment conducive to sleep. A 20-minute nap might be refreshing, but longer sleep sessions during the day can make it harder to get good rest at night.

5. Instill a regular bedtime routine. Try to have your kids turn the lights out at around the same time each night and wake up at the same time each day, even on weekends, because the evidence shows you can’t really make up sleep debt on the weekends.

6. Put all electronics away. Research has long shown that screen time interferes with good sleep because it’s stimulating, and while blue light filters minimize the most troublesome part of the spectrum, they can only help so much if your teen is stressed out.

7. Limit caffeine. After school, many teens may grab a soda or energy drink to power through the rest of the afternoon, but this just makes going to bed on time more difficult. 54 percent of parents had their teens limit caffeine in the evening, although it’s even better to cut it back earlier in the day or perhaps completely.

8. Before trying a drugstore sleep aid, talk to your doctor. Parents frequently turn to remedies like melatonin and over-the-counter drugs like Tylenol PM or NyQuil when their teens encounter sleep problems, but please have your teen evaluated by a doctor first. Melatonin isn’t always gentle or effective, and scientists still don’t know much about its long-term effects. Heavy use of OTC drugs can be habit-forming and hard on the liver as well.

Overall, however, the most effective thing parents can do is listen to our kids. Talk with them about their sleep challenges, and then you can work together to help them set a regular sleep schedule. It’s never to early (or too late) to find healthy ways to relieve daytime stresses that can disrupt sleep at night, whatever your age.

We would like to thank you, your service and most especially Alison LeBlanc for all of your help and support during my daughter’s application, interview and essay submissions. Thank you so much for everything. We will definitely keep your company in mind for our son who will most likely be applying to various schools in 2 years. We will highly recommend both Alison LeBlanc and your company to anyone in the future. It has been a pleasure…