1. Take a step back. If your 6-month-old is having trouble fitting puzzle shapes into the right hole, you might want to take the circle and drop it into the right slot for them. “Teaching children to be independent begins in early childhood, and will look different and be guided differently based on a child’s age,” says Stephanie Irby Coard, Ph.D., associate professor of human development and family studies at the University of North Carolina Greensboro.

Like Lerner, she says that teaching independent thinking begins early on. If parents can practice taking a step back and allowing their child to solve problems, even as babies, it will go a long way toward helping them navigate the world on their own. Instead of just dropping the puzzle shape in for them, for example, maybe you can verbally guide them, allowing them to figure it out. This way, you teach kids they can solve their own problems.

Of course, if your 6-month-old is struggling, you might want to eventually point to the right shape instead of leaving them completely alone, which can frustrate them. The key is to take a step back and give them the chance to think about the problem at hand. Later on, this might translate to letting them figure out how to get down a slide on their own (with some gentle verbal guidance) or giving them the chance to figure out a social situation between friends without “solving” it yourself.

2. Set an example. A great way to teach kids how to do anything is by doing it yourself. “Model responsible decisions, and be transparent with your own reasoning and thought process in making decisions,” suggests Dr. Coard. You can talk through your own decision-making process even when your kids are small, to help them understand why you’re doing things a certain way.

As kids get older this transparency can cross over into talking honestly about social situations, financial decisions, or household values and responsibilities. If they observe how and why you’re making certain decisions, it doesn’t mean you’re forcing your kids to think the same way you do. It just means you’re allowing them to see and understand your path to making an independent decision. If your child questions you or comes up with an alternative solution, it’s important to validate their thoughts and feelings, even if their wild little imagination comes up with an outlandish solution. “That’s how creative thinkers are born,” says Lerner. 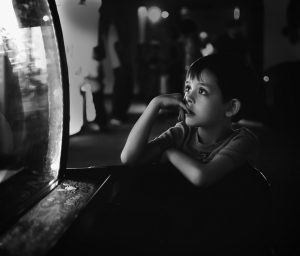 3. Listen before speaking. Taking a step back and learning to actually listen to your child instead of forcing a decision upon them is important, especially as kids get older. “Teaching kids to think for themselves means parents must gradually loosen the reins so children can gain valuable confidence and experience making self-guided decisions,” says Dr. Coard. “Support your child’s need to build some sense of autonomy by giving advice only after you hear what they have to say and what their sense of direction is.”

Again, this might be tough for some parents since our natural instinct might be to rush in and save the day with a “simple” piece of advice, but you won’t be doing your child any favors if you disrupt their own process. That’s how they’ll grow and learn. “Your job is not to solve all of your child’s problems,” says Lerner. “It’s to teach kids the confidence and skillset to solve their own problems.” Listening before speaking is key when it comes to boosting their confidence and allowing them to grow as an independent thinker.

4. Challenge them. You might want to give your baby a boost every time she tries to pull herself up into a chair, but challenging her to hoist herself up can be a valuable lesson that she’ll carry with her into adulthood. Dr. Coard suggests to teach kids who are older to use self talk or write in a journal to help guide their decisions. Instead of telling them how to react in a social situation, maybe say, “Well that’s what Connor did, but what would you do in that situation?” Give them hypotheticals and let them navigate potential scenarios as practice, challenging them about why they would do things a certain way so you can help them work through the process.

It doesn’t have to be a pushy, militant mental exercise, but asking them why they’re making certain decisions during everyday conversation can help facilitate their ability (and desire) to think for themselves. It also doesn’t hurt to encourage your kids to take part in extracurricular activities that involve public speaking or debate as they get older, says Dr. Coard. This can help boost their confidence and get them comfortable making their voice heard.

5. Remind them that mistakes are okay. Thinking for yourself doesn’t mean that every decision you make will be the right one, obviously. It takes courage to speak out and make bold choices, so it’s important to help kids feel that even if their thought process doesn’t lead to decisions or actions that work out every single time, it’s all about learning to make better and more informed decisions the next time. “Discuss and normalize the fact that people make mistakes and that learning from them is what is most important,” says Dr. Coard.

Instead of having a knee-jerk reaction and trying to correct them, Lerner advises parents to teach kids and teens to work to understand and sit with their decisions, and talk to them about what might have gone “wrong,” rather than simply trying to fix things. “Listening to their perspective is very powerful,” says Lerner. “If you don’t rush in to help, you’re actually saying to them that you have total faith that they can solve a problem on their own, and that you’re here to help if they need it.” Ultimately, kids shouldn’t fear thinking for themselves because they might make a wrong decision, they should grow to understand that standing up for their beliefs is a process, and mistakes will just allow them to make better decisions as they move through life.

Taking a step back and allowing your kids to think for themselves might be tough for some parents, but allowing children the space to make mistakes and gain confidence in their decision-making skills should start early on. It can be hard to let your kid sit with discomfort as they navigate the world on their own. That discomfort doesn’t mean you’re not there to help, it just means you’re allowing them the space to grow, and think, on their own.

“In the future we absolutely look forward to working with you and Greg Conklin again… When we had talked last August, you were confident that you had a solid match for us in Greg and you were 100% right! Greg was so wonderful with our sons – he was patient, corrected them in a very kind manner, was completely engaged, and supported them through this entire process. Greg worked very hard to relate the material…