When Millis Public Schools opened its doors for the start of the 2021-22 school year, teachers and staff were looking forward to seeing their students back in real classrooms. “We were so excited that everyone was coming back to begin the school year,” says Bob Mullaney, the superintendent of the suburban Boston school district. But the transition has been more fraught than anticipated due to students’ social and mental health needs. From the beginning, they’ve seen elevated levels of stress, anxiety, and different behavioral issues in students, says Mullaney.

Schools across the country are overwhelmed with K-12 students struggling with mental health problems, according to school staff, pediatricians and mental health care workers. Not only has this surge made the return to classrooms more challenging to educators, it’s also taxing an already strained health-care system.

The U.S. Surgeon General also called attention to the crisis in an advisory on youth mental health issued in December 2020. The rise in symptoms continued through 2021. According to data from the Children’s Hospital Association, there were more than 47,000 mental health visits to emergency departments at 38 children’s hospitals around the country in the first three quarters of 2021 – nearly 40% higher than the same period in 2020. 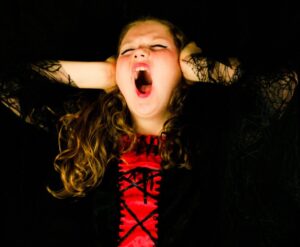 The situation has worsened in recent months. Schools are seeing many kids acting younger than their age, says Dr. Vera Feuer, an associate vice president of school mental health at Cohen’s Children’s Medical Center in Long Island. For example, high schoolers are behaving more like middle school students, often shoving and pushing each other in the hallways, she says. Some kids who are struggling often manifest their emotions with more aggression and violence.

“In some districts, they are seeing really alarming numbers of fights among students,” says Mullaney. In addition, Mullaney says there have been recent reports of violence against those in authority: a school principal in Massachusetts was assaulted by a student, he says, and other schools have had staff members assaulted by students. And many students are hurting themselves. There has been a rise in students reporting self-harm, suicidal thoughts and attempts in his district, says Mullaney. His school district has referred more kids for mental health treatment than ever before, he adds. Based on data from nearly 40 children’s hospitals around the country, there were 14,630 ER visits for children aged 5-18 years between January and September of last year.

“And unfortunately, younger children are experiencing higher rates of this than they have in the past,” said Amy Knight, president of the Children’s Hospital Association (CHA), who moderated a congressional briefing on the youth mental health crisis. Indeed, health-care providers across the country are seeing more referrals with cases that go beyond schools’ capacities.

“Definitely we’re seeing schools referring kids with more behavioral issues and aggression,” Feuer says. She and her colleagues are also seeing kids with depressive symptoms and those refusing to go to school and needing to be assessed for suicide risk. According to CDC data, the number of Emergency Department visits due to suspected suicide attempts by people aged 12-25 started to rise by May 2020, and children’s hospitals around the country have seen those numbers continue to increase.

Much of this increase in reports of mental health issues stems from the stress of returning to school, says Dr. Tami Benton, psychiatrist-in-chief at Children’s Hospital of Philadelphia, referring to her and her colleagues’ observations working with patients and schools.

“The year that they were out of school was a year that they didn’t have the opportunities for developing the social skills that normally happen during their period of development,” she says. “And you’re sort of catching up on all of that under extraordinary circumstances.”

High school junior Francesca Henderson of Atlanta says many of her friends have felt anxious about navigating the social landscape after a year in isolation. While Henderson herself was able to maintain her friendships through the pandemic, she says she initially found it difficult to interact with people up close again.

“The biggest issue I had was adjusting back to in-person life,” says the 17-year-old. Academics have been stressful, too. “They made a lot of things a lot easier [last year],” Henderson says. “We didn’t have exams; we had projects and almost all of our assessments were open. So you didn’t have to study as much.” Henderson and her peers have had to re-learn skills like time management and are focusing to catch up with this year’s tougher academic pressures.

That catching up has been particularly hard for some kids, Benton says. Children with special needs who relied on in-person support at school fell far behind their peers both academically and developmentally last school year, as did kids who had a mental health diagnosis before the pandemic.

“Many people had delayed services, so by the time they did seek mental health treatment, they were actually doing worse,” says Benton. “For some of those kids, who had actually pretty strong peer support groups prior to the pandemic, [they] had to reestablish those [relationships] when they returned to school.”

Henderson has seen that among some of her friends, whose emotional wellbeing benefited greatly from social interactions at school before the pandemic. “So you take that away cold turkey, it was kind of detrimental.” Then there are children grieving the loss of loved ones to COVID-19. An estimated 175,000 lost a parent or a caregiver, according to a CDC study. Kids of color have been disproportionately affected by these losses because long standing inequities caused higher death rates in their communities. The CDC study showed that compared to white children, Asian children were 4.5 times as likely to have lost a parent or another caregiver to COVID-19, Black children were 2.4 times as likely and Hispanic kids twice as likely.

“And that trauma alone is very significant,” says Dr. Nicole Christian-Brathwaite, a child and adolescent psychiatrist and chief medical officer at Array Behavioral Health, a telepsychiatry company. It’s especially strong “when there are some children who have lost generations of family members and then going into school and having to manage that stress without necessarily having a therapist available or school counselor or nurse.”

Nor is there always adequate help for these children. Schools in many underserved communities have no mental health support, she adds. “Some schools have one counselor spread across an entire district.” And many kids who developed symptoms of mental health problems during the first year of the pandemic didn’t get help right away because they were away from school staff who might have spotted symptoms early on.

Pre-pandemic, schools were “kind of like the first responders” with respect to student mental health issues, explains Mullaney, the Massachusetts superintendent. Teachers and other school staff would spot changes in behavior or symptoms of mental illness and connect those kids to help. But that proved harder in a virtual learning environment. With an already saturated health-care system, kids and families are struggling to get timely help.

“You’re seeing this perfect storm of just the increased need [and] difficulty accessing care,” says psychiatrist Feuer, referring to the demand on mental health professionals. “Everybody’s booked or not taking new patients or really scheduling very far in advance. But in many cases, not even scheduling, just saying ‘right now, we can’t take anybody new,’ because they are so full.”

As a result, families are left with no options but to take their child to a hospital emergency room for diagnosis and treatment of mental health issues, especially if the child is in a crisis. Emergency department visits at Colorado Children’s hospital for child and adolescent mental health increased by 75% in recent months, said Heidi Baskfield, vice president of population health and advocacy at Children’s Hospital Colorado, speaking at a virtual congressional briefing last month. She called the situation “untenable” for providers and communities.

“On any given day in our emergency departments, there are between 15 and 40 children with mental health needs seeking care,” she says. “We are consistently full with all of our mental health units. Our outpatient visits went from a three-week wait to sometimes upwards of nine months. Imagine you’re the parent of a child in crisis calling for help and being told, ‘call us back in a year.’ ”

The steep rise in need has led schools and health-care providers to come up with some solutions on the fly. Overwhelmed school staff in many places have reached out to mental health-care providers for advice on better spotting symptoms of mental and behavioral problems so that they can help kids sooner. In some well-resourced communities, schools and providers are collaborating to connect kids to care before things escalate. There has been some recognition of the problem at the federal level, and some resources to address it. The CARES Act and the American Rescue Act have helped many schools add more counselors and social workers to address the increased demand.

But Mullaney is still concerned about what will happen when the money from COVID relief plans run out. “We need to find a way to continue these services,” he says. “The need is still going to exist for years to come.”

This article originally appeared on NPR.

Katie Mason and my daughter hit it off quite well, so were quite pleased with her tutoring.