The College Scorecard has gotten a makeover. And no, this has nothing to do with your March Madness bracket. The Scorecard is an online trove of federal data that can help prospective students choose the college that’s right for them – and, just maybe, avoid a lifetime of student debt and heartache.

The site, collegescorecard.ed.gov, can tell you a lot about a school – from its graduation rate and the earnings of former students, to how much debt you can expect to take on. Earlier this month, the U.S. Department of Education updated the site, adding new data, details and restoring a few statistics that the Trump administration had scrapped.

The updated scorecard lets you compare schools based on graduates’ earnings, then see how those earnings compare to workers without a degree. It even shows how well a school serves its low-income students.

“The updated and enhanced College Scorecard shines a spotlight on affordability, inclusivity, and outcomes, over exclusivity and colleges that leave students without good jobs and with mountains of debt,” said U.S. Education Secretary Miguel Cardona.

What follows is a look at what’s new and, for those of you who haven’t used it before, a quick tutorial. Consider this a news story/user’s manual; a newsual. For help, NPR called on Michael Itzkowitz, the Scorecard’s former director who managed its launch in 2013 and its 2015 revamp.

Let’s start on the home page.

The Scorecard is like a shopping mall: It has many doors. Maybe the easiest to use is the “Search” button in the upper right corner. Click it, and you’ll see a massive list of every school with students who receive federal student aid. 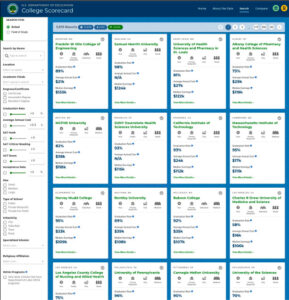 These schools are now, by default, ordered according to the median earnings of students 10 years after they enrolled – not just graduates, but all former students who received federal aid.

It’s a fascinating Polaroid of what the U.S. economy values – a whorl of highly-selective heavy-hitters that specialize in engineering and computer science (MIT, Harvey Mudd), and less-selective programs for in-demand healthcare jobs like nursing (MCPHS University).

It’s a good reminder about the sometimes-overlooked fields of study that give students the most bang for their buck – something Itzkowitz, now a senior fellow at Third Way, has crunched the numbers on.

While some students may want to use the Scorecard to do nationwide searches, Itzkowitz says, “Most students look for a college closer to their home.” Let’s do that.

In the white column along the left, there’s a function to search by “Location” – you can either select “Near Me,” type in your zip code or simply look statewide. For this search, we used Itzkowitz’s Florida zip code, then expanded the search to include all schools within 50 miles. Also, be sure to check the kind of degree you’re hoping for. We checked bachelor’s and… voilà!

Thirty-nine colleges and universities show up, and you can immediately see their graduation rates, average annual costs and, again, the median earnings of former students. West Coast University-Miami is first in line because its students’ median earnings hit a whopping $97,371(another nursing-focused school).

Now check out the second school on the list, University of Miami. 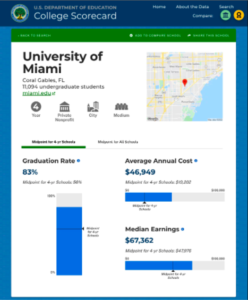 83% of students graduate within eight years of enrolling, which is considerably better than the midpoint for four-year schools, 56%. Median earnings are also well above the midpoint. 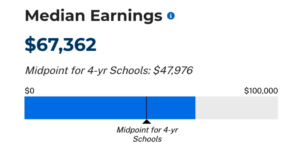 But the annual cost is more than twice what you might expect to pay at other four-year schools.

Now scroll down to the University of Miami’s “Fields of Study” section, and click to expand it.

You can see the school offers 93 undergraduate fields of study, of which nursing and finance are the largest. But if you sort by “Highest Earnings,” computer science and mechanical engineering win out. This snapshot of program-level earnings was added by the Trump administration.

Here the Scorecard lays out what you might expect to pay, depending on your family income. At the University of Miami, families earning $0 – $30,000 still face a pretty steep price tag: $42,611. 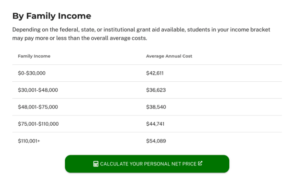 Under “Graduation & Retention,” you’ll find a handful of useful stats, including a new function, “Show Pell Grant Recipients Only,” that offers a clearer sense of a school’s commitment to helping low-income students finish their degrees. The University of Miami’s Pell-only graduation rate drops slightly, to 78%, but that’s still well above the 56% midpoint for four-year schools.

This article was originally posted by NPR. For more examples of how to use the College Scorecard, click here.