Addressing weight with your child is a sensitive matter—you want them to be healthy, but also want them to accept their body. Weight is an incredibly fraught topic as well as an imperfect indicator of health. As parents, a kid’s sudden weight gain can be hard to know how to tackle. The last thing we’d want is to set the stage for poor body image or eating disorders for our children. Here are some tips on how to walk the fine line.

1. Focus on health, not weight. Childhood obesity has tripled in the past 40 years, hitting one in five school-aged children, according to the CDC. Excess weight can increase a child’s risk factors for type 2 diabetes, heart disease, and some forms of cancer, says Maryam Kebbe, a researcher on children with obesity at the University of Alberta in Canada. At the same time, eating disorders and body positivity have become important topics for today’s youth.

So if your child is overweight, how can you address it with them? First, focus on health, not weight. “It’s a common mistake to focus on the weight itself—this is usually counterproductive,” says Elizabeth Shepard, MD, pediatrician, nutrition, and obesity specialist at Stanford Children’s Health. “The focus should be on action, i.e. incorporating lifestyle changes that lead to the desired outcome of a healthier weight.” For example, try talking about the amazing things healthy foods can do for the body, like give you energy to run, jump, and play—so when you start serving them, there’ll be a positive association.

2. Don’t mention “dieting.” Eating healthy isn’t dieting, so avoid using that word. “Changes have to be sustainable over the long term to be effective,” Dr. Shepard says. “Making changes in food is not ‘going on a diet.’” Stress that new foods will be delicious, and try some out until you find healthier options your child truly enjoys—this way, they are part of the decision-making process, too. Because you’re making changes as a family, your child won’t feel singled out or shamed for what they can or can’t eat.

In addition, the American Academy of Pediatrics (AAP) notes that research shows dieting (defined as calorie restriction with a goal of weight loss) is actually a risk factor for both obesity and eating disorders among teenagers. So, avoid talking about calories or numbers—just focus on healthy meals and snacks.

3. Less talking, more doing. Sometimes the best way to talk to your kids about weight is actually not to talk about it at all. For younger children, it might not be necessary to even explain why changes are being made—instead, just do it. For older children, it’s a little trickier, especially if they bring it up. “Psychological and emotional concerns are very common in children with excess weight,” Kebbe says. “Many boys and girls experience weight-based teasing and bullying, which often have a negative impact in their lives.” Before deciding whether to address it directly, gather details about whether your child is actually concerned about their weight. If they’re not, gentle lifestyle switches may be the better than a direct discussion about weight, which might affect their self-confidence.

4. Consider your kid’s opinion. If your child is older and expresses interest in talking about their weight, ask them for their preferred word choices. “Recent research with teenagers showed that they liked ‘heavy’ for boys and ‘curvy’ for girls,” says Geoff Ball, PhD, director of the Pediatric Center for Weight and Health at Stollery Children’s Hospital. Don’t use words like “obese” or “fat,” and maintain sensitivity and respect by asking your child’s opinion on everything—including the changes that will be made.

“When talking with children, it’s key to be conscious of the language used, talk about weight and possible lifestyle changes in a sensitive manner, and respect children’s readiness to change,” Kebbe says. “Forcing change on someone else when he or she isn’t ready can have the exact opposite effect.” Instead, ask them how they feel about it and what they think their goals should be, and let them know they have your full support. 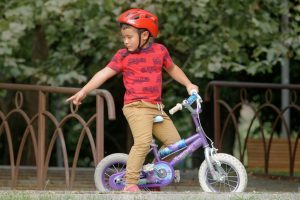 5. Make healthy eating a family priority. If a child has unhealthy eating habits, parents have the ability to simply provide healthier choices, especially for elementary-school aged children. “The best changes to make are the ones families are ready, willing, and able to work on,” Dr. Ball says. And it’s not just about what they eat, but how. “Sometimes these changes are big, but sometimes they’re small—they can include, for example, eating dinner together as a family, and including children in buying and preparing food,” he says.

Family meals have been shown to improve and sustain dietary quality, while also protecting against eating disorders, says an AAP report. Plus, involving your child in going to the grocery store and helping to cook can lead them to feel good about what they’re eating. “Healthy habits should be fun and not a chore,” Dr. Shepard says.

6. Don’t eliminate all “bad” foods. At the same time, you don’t want to banish favorite items completely, as this strategy may set them up for an unhealthy relationship with food cravings. Instead, change can be gradual. “Trying to cut out every food that a child craves often backfires,” Dr. Shepard says. “They may eventually decide that they don’t want these foods anymore after learning to enjoy other types of foods, but in the short term it helps them to know that they can still have their favorite food, for example once a week.” Plus, if a child sees a bleak future with a restricted diet, they won’t be very motivated to embrace changes, she says.

7. Don’t body shame. Whatever you do, avoid shaming or criticizing a child for their weight. A Cornell study found that women who remembered their parents commenting on their weight when they were young were more dissatisfied with their body weight as adults, even if they weren’t overweight. Other research has found that labeling a child as “too fat” predicted a heavier BMI 10 years later, regardless of their initial BMI. “It is generally much more effective to offer support for moving in the desired direction than to criticize for making poor choices,” Dr. Shepard says. This means no body shaming yourself as well–kids hear everything, and it’s all too easy for them to pick up on bad body habits.

8. Praise positive action. As with most childhood behaviors, positive rather than negative reinforcement is a better option. Accentuate the positive things your child has been doing to lead a healthy lifestyle, and offer encouragement. “For example, if a child decides to play basketball every day, give lots of praise for the new activity,” Dr. Shepard says. “Also, if the child feels that they have failed, point out that everyone has setbacks and they can use these as a motivation to move forward.” Let them know you have confidence in them to get back on track. Dr. Ball says it’s important to be realistic and understand that it can take a while for new habits to stick, so encourage your child—and yourself—not to be too hard on themselves.

9. “Lifestyle changes” don’t just mean food. A healthy diet is crucial, but there are other overlooked aspects to weight management, too. “When we talk with families about lifestyle changes, it is normally diet and activity that come up,” Dr. Ball says. “However, addressing physical inactivity and sleep are also important for a healthy lifestyle.” He suggests limiting screen time so kids are encouraged to get out and move around. And although the connection between sleep and weight is still being researched in children, there is a definite association between sleep duration and obesity risk, according to research from the University of Michigan, so make sure your children are getting enough sleep for their age on a regular schedule.

10. Schedule active family outings. The other major piece of the puzzle for weight loss is exercise. But short of putting your kid on an actual training routine, how do you get them to move more? “Make it fun,” says Dr. Shepard. “For younger kids this means encouraging them to go outside and play or do something fun inside the house like dance around to music. Also, try making it a family affair—for example, the whole family can go for a walk or a bike ride, or go to a park for a picnic.” Also, suggesting they join a sports team or take lessons (or simply enrolling them if they are younger) can get them more active—again, focus on the health benefits of exercise rather than losing weight.

11. Model the behavior. All of these lifestyle changes need to be family-based to be effective, so it starts with changing your own habits. “Children learn a lot by observation, so if parents want their children to make healthier lifestyle choices, they can help by being healthy role models,” Dr. Ball says. Children may be resistant, so start by changing your own habits first. “If boys and girls aren’t ready to make any changes, parents should consider what they themselves can do to help their family be healthier,” Kebbe says.

Dr. Shepard says that parent involvement is vital to kids’ success in controlling their weight. “Kids are much more likely to practice healthy behavior if they see their parents and peers doing so,” she says. “It helps them to buy into lifestyle changes if they see that their parents are willing to do the same.”

12. Be body positive. At the same time you want to praise you child for setting and achieving goals, it should never be about numbers on the scale or appreciation for being thinner. Instead, the focus of praise should remain on health and the amazing things our bodies can do when we’re in shape. For example, large thigh muscles are evidence of strong, powerful legs. “You can also point out that people come in all different sizes, and the goal is to be the healthiest you can be for your own size,” Dr. Shepard says.

Start with your child’s pediatrician, who may refer you to pediatric weight specialists. Make sure your child is not in the room and out of earshot when you have the initial conversation if your child hasn’t expressed dissatisfaction with their weight themselves. If they have, “for health care professionals to be patient-centered, parents and children should be included in discussions and take their preferences into account, especially since many options are available,” Kebbe says.

I was extremely pleased with my experience with your company. You responded quickly to a request for a tutor and introduced me to Simon Beugekian. Simon provided ISEE prep to my son who is going into grade 7. He was prompt, courteous, and friendly. He connected with my son instantly and began immediately. I was very pleased with my overall experience and would not hesitate to use your company and hopefully Simon again. -John D.